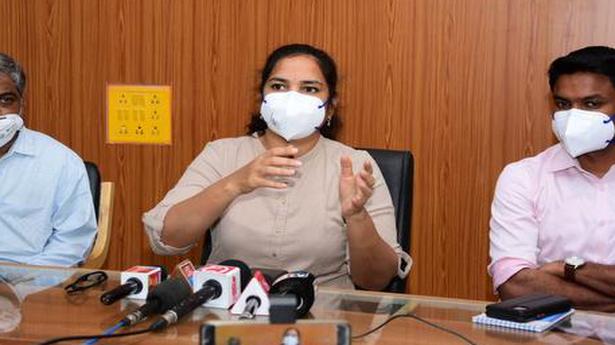 Admitting the shortfall of medical oxygen and the Intensive Care Unit beds within the district in opposition to the swelling instances of COVID-19 essential sufferers, Deputy Commissioner of Kalaburagi Vijaya Jyothsna stated that the administration was under tremendous strain for sources.

“Our daily requirement of oxygen has gone up from 7 kl a day a few days ago to 15 kl now owing to the sudden surge in the number of critical COVID-19 patients. If we could get an additional 10 kl, we can comfortably handle the situation. We are trying to augment and streamline the supply by employing multiple methods. District in-charge Minister Murugesh Nirani has been apprised of the situation and he is also trying to get the lifesaving gas by talking to the producers, particularly those operating from Jindal Steel plant at Toranagal, Ballari district,” Ms. Jyothsna advised mediapersons right here on Tuesday.

Asked in regards to the allegations of oxygen being bought at an inflated value within the black market by one of many oxygen bottling items within the district, the Deputy Commissioner stated that she was conscious of it and had taken a call to take over the plant in query under the Disaster Management Act and function it under the aegis of the district administration.

Responding to a query on the shortfall of oxygen provide to personal hospitals because of the alleged instructions from the administration to oxygen suppliers to chop down provides to personal services to reinforce provides in authorities services, Ms. Jyothsna dismissed the allegation by stating that Gulbarga Institute of Medical Science (GIMS) and ESIC Medical Complex, the state-run COVID-19 hospitals, have been self-sufficient for oxygen and attributed the issue to the fast surge within the demand.

“COVID-19 patients are coming to government hospitals when they reach the critical stage and this has led to a shortfall of oxygenated beds. We are now expanding the oxygenated bed capacities in GIMS and ESIC Hospital. In this backdrop, we have asked the oxygen suppliers to supply for government facilities as well. But, we have not asked any supplier to cut down the oxygen supply to private facilities… We are maintaining a stock of 50 cylinders all the time and any hospital could contact us in an emergency,” she stated.

Asked whether or not the administration had requested the hospitals to not use high-flow nasal cannula (HFNC) to minimise using oxygen, Ms. Jyothsna responded negatively by stating that it could be the treating physician who would take a name on what and what not must be used relying on the affected person’s situation.

“Each patient is different and the treating doctor is the best to judge what is best for the patient. We have, however, advocated judicious use of medical oxygen at the time of its dearth so that the limited lifesaving gas could be optimally used to benefit more number of patients in need,” she stated.

On the 4 deaths in Afzalpur taluk hospital late on Monday that have been attributed to the shortfall of oxygen, Ms. Jyothsna admitted the deaths however denied the oxygen scarcity as a trigger for them.

“Of the four deceased patients, two were confirmed COVID-19 patients and others were suspected COVID-19 patients. They died of other health complications and not of oxygen deficiency. The taluk hospital had enough oxygen stock. Had there been a shortfall of oxygen, they would have definitely called us and we would have immediately supplied it from the stock,” she stated including that the administration was finishing the demise audit of every case inside 72 hours.