COVID-19 surge: Rahul Gandhi says only a full lockdown now can save people 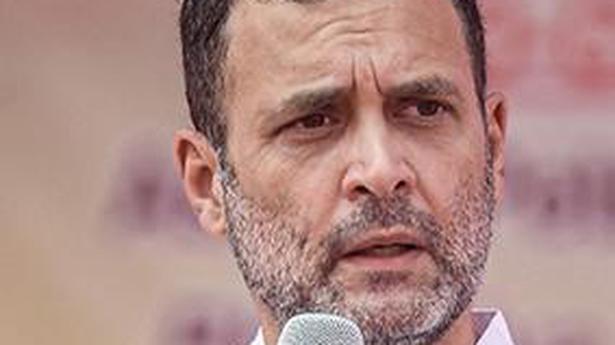 The Centre’s ‘inaction is killing many innocent lives’, the Congress chief says in a tweet and urges money switch for the susceptible sections.

Former Congress president Rahul Gandhi in a tweet on Tuesday mentioned only a full lockdown within the nation may now save human lives however the authorities of India’s (GOI) “inaction is killing many innocent lives”.

In one other tweet, Mr. Gandhi clarified that he was now advocating a full lockdown only as a result of the Centre’s lack of technique in opposition to COVID-19 allowed the state of affairs to achieve this stage and a “crime has been committed against India”.

However, the Congress chief mentioned the federal government should first guarantee money switch for the susceptible sections.

“GOI doesn’t get it. The only way to stop the spread of Corona now is a full lockdown — with the protection of NYAY for the vulnerable sections. GOI’s inaction is killing many innocent people,” Mr. Gandhi tweeted.

The Congress has been advocating a minimal revenue assure scheme or ‘nyuntam aay yojana’ (NYAY) for people who stay on each day revenue to compensate for the lack of revenue.

“I just want to make it clear that a lockdown is now the only option because of a complete lack of strategy by GOI. They allowed, rather, they actively helped the virus reach this stage where there’s no other way to stop it. A crime has been committed against India,” he added in a subsequent tweet.

Review: A New ‘Mosquito Coast,’ This Time With Narcos