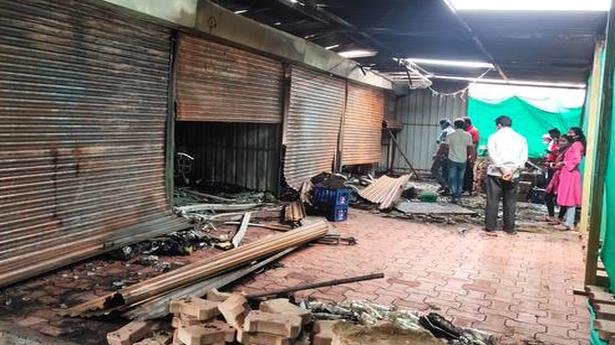 
Four shops have been gutted at Banakal in Mudigere taluk on Wednesday evening. Valuables value over lakhs of rupees have been lowered to ashes.

The hearth was initially noticed in one of many shops situated in a fancy owned by Mahesh Gowda, a resident of Banakal. Gradually it unfold to neighbouring shops. The native folks knowledgeable the Fire and Emergency Services and the police.

A hearth tender from Mudigere reached the spot to place out the fireplace. As it was inadequate to extinguish the fireplace, one other car from Chikkamagaluru was referred to as in. Ok.P. Shashidhar, District Fire Officer, advised that the operation ended by 4.30 a.m. “Four shops, each measuring approximately 10/15 sq.ft, are separated by zinc sheets. The actual reason for the fire is not known. Valuables of a mobile service and sales shop, a bakery, a footwear shop and a hair salon, are lost”, stated the officer, who additionally visited the spot.

The businessmen had not opened the shops for the previous few days as a result of lockdown.