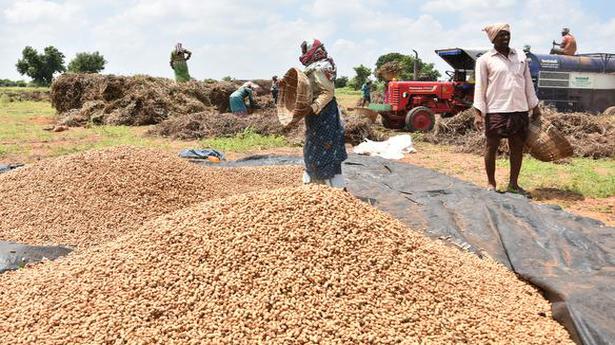 
Over the previous decade rising cost of groundnut crop production has been driving away farmers to different remunerative crops like horticulture, as a results of which the whole space the place the groundnut is sown has come down in Anantapur district, the biggest producer of groundnut within the State.

The cost of cultivation additional rose to ₹2,913 crore final 12 months, when the crop space was 4.8 lakh hectares, and the agriculture division estimated the whole production at 2.18 lakh metric tonnes, in line with Joint Director Agriculture Y. Ramakrishna. Yerragunta Ramireddy and Pullalarevu Chenna Reddy of Raminepalli in Rapthadu Mandal are two such farmers who gave up cultivating groundnut crop as now they’ve to purchase seeds, have interaction labour at a mean wage of ₹500 a day. On high of that, the ever-increasing want for utilizing fertilizers and pesticides made the income vanish.

“Earlier, we used to store our own seeds and sow them next year and were sure of the quality, but now we have to depend on private sellers or the ones offered by the government at subsidised rates. Apart from this, labour charges have increased considerably,” mentioned Mr. Ramireddy, who owns with 30 acres of land. Mr. Ramireddy, who used to reside in a joint household, didn’t have to rent many labourers earlier as his members of the family had been all engaged within the work.

“But now, most of the children go to school or colleges and settle for jobs with none to take care of the agriculture. This has led to dependence on labourers and tractors, shunning the bullocks,” Mr. Chenna Reddy identified. The present cost of cultivation was over ₹25,000 per acre and the rising charges of diesel and petrol have pushed up the cost of hiring tractors additionally. Both the farmers are actually rising pomegranate.

Youth organisations to step up stir for new job calendar

Strike brings rural water supply in Anantapur to a halt

Strike brings rural water supply in Anantapur to a halt

10 lakh migrants in Delhi will benefit if ONORC is implemented, says Food Secretary